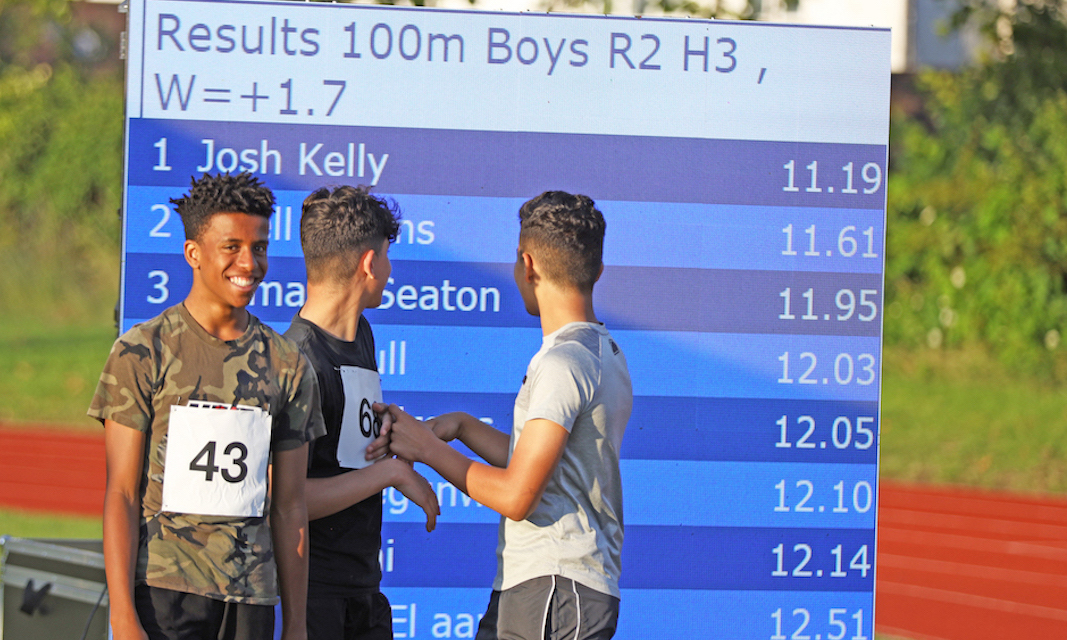 Junior athletes from schools across London came together at the Willesden Sports Centre for a fun and competitive evening of sport hosted by Track Academy.

More than 70 young athletes took part in the event, which was licensed by British Athletics. For many of them, it was their first competition, with parents, friends and teammates in the stands cheering them on.

Competition co-ordinator Victor Nutakor said: “The atmosphere was lively, the wind was calm and terrific performances ensued. This was the perfect chance for the athletes to showcase their months of hard training during a challenging season.”

Victor added: “Quite exciting within this age group was the emergence of seven-year-old Zion Hall from Ark Atwood School; he sped away to a fast 12.63s in the Under 11s. A few more years lie ahead in this age group as this exciting talent makes his mark.”

In the girls’ races, Eloise Erasmus of DILI Academy posted a fast 12.49s. Meanwhile, a scintillating performance by seven-year-old Iyana Barbe-Nutakor saw her clock an impressive time of 13.51s.

The fastest 100m of the day came from Track Academy’s Under 20 Josh Kelly with a superb 11.19s, just a tenth shy of his own personal best as he edges closer to breaking the significant 11 second barrier. Airell Adams and Demario Seaton posted 11.61 and 11.95s respectively in a competitive 100m.

The girls’ 100m races saw a huge win and a personal best of 12.99s for Sia Bona as she dipped under the 13s barrier for the first time. This is all the more impressive given that she is in the Under-13 category. Not far behind were fast finishes by Mia Grey and Deborah Ibekwe, with 13.11s and 13.89s respectively.

The boys 200m saw the continued dominance of Josh Kelly, who posted a superb 22.76s whilst Under 17 athletes Maxwell Litchmore and Jordon Andrews clocked a fast 23.87 and 24.93s respectively. Elouise Fenton, an Under 13 athlete from Highgate, dipped under the 30s barrier as she raced to a 29.8s win.

Caitlyn Harvey posted the fastest girls’ time of the evening with 27.67s; this performance came after completing a personal best in the 400m just 30 minutes earlier. Elsewhere, Caitlyn battled with Daniel Idlbi as they raced to the wire in the 400m. Idlbi clocked 58.85 for the win whilst Caitlyn came in at 58.91 for a close second.

The 800m was also competitive as Highgate athletes Izzy Ions and Mia Cobbold clocked 2:34 and 2:37 with a first time performer Joene Kiakoloka of Newman School posting 2:39 in the same race.

Victor said: “A huge effort from Track Academy, with support from track officials and England Athletics, ensured many young children from Brent and beyond were able to access their very first athletics competition.

“They enjoyed going through the process of registration, warming up and performing under pressure whilst having fun and achieving huge personal goals. Track Academy is proud to have offered such a unique opportunity for young kids and their families.”